Everyone on eggshells as they rush to the table already set and a razor-sharp silence punctuated only by the occasional clink of silverware on china. Someone asks, “Pass the peas,” and BAM! Fist on the table; the dishes fly up for a second and quiver as they land. There’s blood in his eyes and bruises to come.

America’s got a bad romance. We’re not just watching a CATASTROPHIC failure at statecraft. America is living in the middle of a malignant narcissist’s wet dream and Dad is on a tear: the economy is in the toilet; there’s that whole Covid hoax/plot WHATEVER; impeachment; the botched photo op; oh, and what’s this about an election? The news breaks about Russian bounties for American heads, and White House staff go into full crisis mode like a 70s era TV movie battered housewife, wide-rimmed sunglasses covering the hint of a bruise. Pull out all the stops: “the most informed man on the planet, believe me,” spits Kayleigh McEnany, though he never saw the memo. The GOP goes radio silent, their thanks for the free pass on Ukraine: Daddy did it again!

So in celebration of the 4th, his numbers tanking, Forty-Five sheds all pretense and goes full bore white nationalist, reframing white grievance dead in the middle of a national reckoning with race and privilege, by coopting the narrative of protest in order decry an attack on the very founders themselves. He may as well have been sporting a swastika.

The honeymoon was nice: the groom was, well, maybe not the best looking, but he had a certain “something.” He descended that golden escalator, a bouquet of promises to drain the swamp and make us great again (when were we not? I seem to recall a certain ‘Baby’ Mama’ (thank you, FOX News getting excoriated for even suggesting we weren’t back in ‘08). He had a wicked (to some) charm, that ineffable “it”—I mean his own TV show, for God’s sake. He had you at “hello.”

The first outburst, was… a poor choice of words. He’s not a conventional guy. Okay, “grab ‘em by the pussy.” What guy doesn’t talk like that? He wasn’t stuffy and presidential. What is that but another word for snob? And anyway, he’s right: if he loses it’s because the cards are stacked against him, against US. And, okay: “Russia, if you’re listening…” WHATEVER. He’s an international man of means. He’s got an instinct about people—so he took their money—just goes to show he’s smart, savvy? Not one of those liberal intellectuals. He just gets us, ya know? Wait ‘til the Inauguration. You’ll see. Before you know it, he’s met the ‘rents and they LOVE him. Before you know it, you’ve moved in together and there’s a baby on the way. I like the name “Brett.”

You see your friends less and less, come to rely increasingly on him to shape your world view, what to wear, what to think, what’s true as he molds his own little fiefdom where he can visit all manner of misery on his captive audience in order to shore up his control and sense of self. Soon to follow are the angry tirades as the monster sheds his charming face; the blow ups from out of nowhere. You’re off balance, but trying to maintain, keep up appearances. Snap to and insert smile when he looks your way. If only you knew him. By then, you’re lost.

If he isn’t a malignant narcissist, he does a damn good imitation. Grandiosity, attention seeking, lack of empathy, an inflated sense of self-importance, of being special, even superior; entitlement and a tendency to take advantage of others, burning, seething envy. Take it a step further: antisocial personality disorder, does manipulation and deceit one better with abuse—physical, verbal, emotional. Either way you’re looking at ground zero. And America is his kingdom. Isolation? Check: first a wall Mexico still ain’t paid for; then the Climate Accords; now it’s the World Health Organization. (Lookin’ at you, NATO); government by Tweet and the daily assault of venom (Can somebody PLEASE take that man’s phone???). Attacked by his own insecurities he seems need to externalize that chaos, maybe so he looks better by comparison (“You think you can do any better than me? Who’d have you? I’m the only one who loves you. I’m the only one who can save you”). Maybe misery just loves company. Either way we’re looking at the man’s insides and it is not pretty.
The categories are slippery , but consistent: there’s the enabler, goes by Mitch, who defends and underwrites every outrage, whether it’s to save face, to bask in the warmth of his good moods and shelter from his blows; maybe it’s just to keep the family together, so seemingly stymied at every turn. Except, they must be getting something out of this (the GOP lately shows a singular lack of interest in governance, only rule). And apparently Mom’s got an emergency bag tucked away in the back of the corner in case of a hasty escape: if his numbers don’t go up by the end of August, cut him loose. Must be some prenup.

You watch the Senate trip over itself to keep Daddy happy: the golden child, the hero child who can do no wrong, the MAGAs, “real ‘Murica,” this year’s Average Joe and FOX news (until recently), the compulsive over achiever—“We’re #1!” Meanwhile, CNN and the rest of the media keep trying to normalize his behavior, wistfully returning again and again to the hope that this time Daddy will be “good,” but managing only to keep up the charade. Then there are the “fringe elements”—BLM, HIRC, Antifa, the CIA the DEMS--the nation’s problem child, the scapegoat, always acting out, pointing out the damage—must not love America; there’s the lost child, the Neo Fascists, the Boogaloo Boys, the Undecideds, neglected and forgotten, courted only when required; and finally, the mascot, SCOTUS: the joker, the comic relief. Malleable, adaptable, they don’t fix anything, just make things a little more pleasant for the rest of us.

The thing about abusers? The victim is always at greatest risk when they try to leave. You watch Melania’s mouth snap to for something like a smile the minute Forty-Five turns to her in public then snap back just as quickly the minute he turns away—eggshells. Grown men and woman—JOHN BOLTON for God’s sake—afraid to tell the man the truth—do their JOBS, for fear of him hurting their feelings. Forty-Five is already laying the groundwork for his second act: voter fraud. “If you ever leave me, I’ll kill you,” is not just a turn of phrase. “America, you in danger, girl.” ‘Cause, y’all: it’s four months ‘til November. 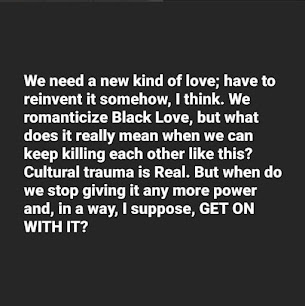 You said I was a sin
In my very nature, offense
And I believed you
I cannot name all my deaths
They just keep coming
And I am screaming
But I keep being born
And I keep being black
I keep BEING

I AM
And no matter how many
Times you kill me
I come back
Because I AM
In and of my Self
Without reflection
Sanction
Permission
I am war
A battle cry
Intentional
And by design
I am divine
In my very being
I am a revolution
Can you hear me now? 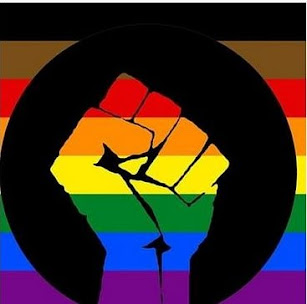 ('Cause it's either that or end up on the Evening News...)